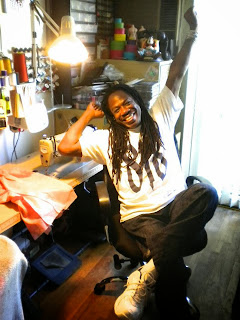 True artists are people who do what they do out of love.  They are driven by passion, inspired by life, and they give their art to the world without thought of monetary gain.  It's about creating something from nothing and sharing that creation with others.  The reward is the creation.  The reward is seeing how that creation affects others in a positive manner.  If material success comes with this passion for creation, then so be it, but for a true artist, that gain is secondary.  Such an artist is California fashion designer Kevin James.

Out of his north Hollywood home, Kevin James conceives and then creates amazing fashion.  He started out in life the son of a lower middle class family in Connecticut.  Long winter days led to a lot of drawing, much of it from his mother's fashion magazines.  He and his brother, Kenny, developed their artistic talents this way.  Kenny went on to become a singer/entertainer, and Kevin designed his clothes.

Kenny's success winning Star Search in 1986, the Gong Show, and appearances on the Redd Foxx Variety Show to name a few all contributed to Kevin being in the right circle of celebrities at the right time.  Word of mouth brought clients and Kevin James began designing for stars like Bette Midler, Randy Jackson of Jackson Five fame, creating fashion for the backup dancers on the Katy Perry tour and his dream gig, designing clothes for the backup dancers and singers on the Michael Jackson This Is It tour that never was after the untimely death of MJ.

Although he has rubbed elbows with Ice-T, his wife, Coco, and Public Enemy's own Flava Flave, Kevin James remains grounded, spiritual, and humble.

Any opportunity to give back, he is on it.  On November 9th, he designed an entire line outside his usual ready-to-wear items for Concert 4A Cause to benefit the Miller Children's Hospital for children with cancer.  The line, which he calls Fantasy, are creations specifically made for the red carpet or premier club events.  Whatever couture flies off his sewing machine, the point of it all, he states, is that it "makes you feel the way you want to feel, not the way you think people think you should feel, but makes you find something in yourself where you're really happy within your own skin."


One thing Kevin James really wants to do is organize a runway show for the homeless. “I want to do a fashion show, and I want to use all homeless women from a shelter.  A high-end fashion show using all homeless women, and even men, and give them a real day, and give them all the outfits – something that they could use, you know, a homeless woman doesn’t need a beaded gown, but she could probably use a nice outfit to go on job interviews or wear every day.  That’s what I’m talking about – fashion – doing something with it.”

His philosophy is to "be there for people", and to never judge anyone because you can't know what people are going through until you've walked in their shoes.

Currently, James is redesigning his website for e-Commerce so that everyone can access and own Kevin James fashions.  Meanwhile he'll continue to be inspired by everyday people, and says he "thanks God for every day."

Read my entire interview with Kevin James on Yahoo Voices.  Keep up with Kevin on Facebook at
facebook.com/KevinJamesFashion.